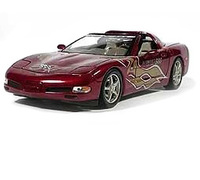 This product has a very limited availability. Please call us toll-free, 1-800-236-2383, or email us at davies@corvetteparts.com to inquire about this item.

This product can expose you to chemicals including Cadmium which is known to the State of California to cause cancer on birth defects or other reproductive harm. for more information, visit www.P65Warnings.ca.gov.

The 50th year Corvette began by receiving Golden Anniversary Accolades by being chosen as the Official Pace Car of the 86th Indianapolis 500. "The Greatest Spectacle in Racing" was paced by the spectacular Anniversary Red Corvette and its 5.7 liter LS1 V-8 engine that produces 350 horsepower in the production model.