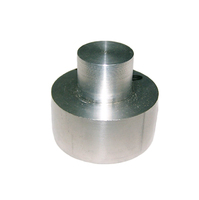 ↓ Jump to Full Product Description
Your Price:
$26.95 /each
Availability:

This item is Available but may require extra time for order fulfillment.

This product can expose you to chemicals including Cadmium which is known to the State of California to cause cancer on birth defects or other reproductive harm. for more information, visit www.P65Warnings.ca.gov.

Aids in aligning hood latch pin to center of female latch hole. If the pins are not correctly aligned, the hood pin will jamb under female latch hole lip. Save time & frustration as getting the misaligned hood open after it's jambed is nearly impossible.

A) Insert tool into the left hand hood latch assembly, the pressure of the latch will hold the tool in position.

B) Slightly loosen the latch or pin mounting bolts. Bring the hood down guiding the striker cone into the bottom of the tool bottoming out the tool on the striker bolt. This will position the centerline of the latch.

C) Raise the hood and tighten the latch mounting bolts. Recheck the alignment and then remove the tool. Move to the passenger side and repeat. Before shutting hood, push downward on the latch area, it should feel springy and not be hitting anything. (be careful not to lock it just yet). If the latch is hitting something and doesn’t feel springy, re-adjust.

1) Pull on left retainer sleeve until slack is removed from the cable. Do not pull hard enough to pull the latch on the passenger side.

2) Measure the distance between the left retaining sleeve and face of the left latch arm. There should only be 1/8” gap between them. This slack is needed to insure that the latches will not disengage due to road vibration.

3) If 1/8” does not exist or if the slack is greater than 1/8”, loosen retainer sleeve screw and move retainer accordingly.

4) If not already done, bend the cable at the sleeves (right and left sides) to insure that it does not pull through if the cable retainer sleeve screw loosens in service. On later built cars that utilize the clevis pin attachment, simply check to see that slack is taken up in the cable. If slack needs adjustment, loosen the retainer and adjust the pin accordingly. (to 1/8” free travel).

This product may not fit all Corvettes of the specifed year range. Some parts were changed midway through a Corvette model's production year. 'E', 'L', or 'M' in the year range designates that it fits "Early", "Late", or "Mid" year production Corvettes for the year specified.